The website of the University of Cádiz uses its own and third-party cookies to carry out analysis of use and measurement of traffic, as well as to allow the correct functioning in social networks, and in this way to improve your browsing experience.

The website of the University of Cádiz uses its own and third-party cookies to carry out analysis of use and measurement of traffic, as well as to allow the correct functioning in social networks, and in this way to improve your browsing experience.

The aim of the Juan de la Cierva contract grants is to promote the employment of young doctors for a period of two years with the idea of completing their postdoctoral research training in Spanish R&D centres other than those where they completed their predoctoral training.

At the University of Cadiz, the following researchers receive this support: Brief curriculum review: Esther graduated in Chemistry in 2005. During her studies she began her research career joining the Inorganic Reaction Mechanism and Stability group of the Department of Inorganic Chemistry as a collaborating student. In the last year of her degree she obtained a collaboration grant from the Ministry of Education, which allowed her to continue her research in this group. The obtaining of a FPI UCA scholarship allowed him to earn his PhD in Chemistry in 2010, working in the kinetic-mechanistic study of macrocyclic complexes and obtaining the Extraordinary Doctorate Award from the University. In 2010 he moved to Grenoble (France) where he began his postdoctoral studies at the Université Joseph Fourier with a mobility grant from the Ministry of Education (MEC Fulbright). During this phase, which lasted until early 2015, he worked on the study of metal complexes with photo and electrocatalytic activity of interest for CO2 reduction and H2 production. In 2015 he rejoined the University of Cadiz and was awarded a Juan de la Cierva Incorporación contract to work on the application of coordinating chemistry for the efficient preparation of advanced environmental catalysts. Brief curriculum review: Graduated in Biology from the Autonomous University of Madrid (2009), Ana developed her doctoral thesis in Soria (University of Valladolid) studying interactions between high mountain Mediterranean plants thanks to an FPI grant (2015). During this time, he completed several pre-doctoral stays in Germany, Switzerland, Chile, the United States and several centres in Spain, and his thesis was awarded the Extraordinary Doctorate Prize. In a first postdoctoral stage he studied the growth of trees in Ecuador’s tropical dry forest over a 6-month period, and also worked with seed dispersal in Mediterranean scrub in Portugal for another 6 months. Juan de la Cierva has been a researcher at the UCA since April 2017. His lines of research focus on knowing the response of plants to climate and evaluating the effects of interactions between plants at the individual level and on the ecology of populations and communities. It uses dendrochronological techniques, quantitative wood anatomy, demography, ecological modelling and spatial analysis. Brief curriculum review: María completed her doctoral thesis at the Institute of Biomedicine of Seville (University of Seville, 2012) with an FPI grant. Subsequently, he completed his first post-doctoral period in Brussels (2013-2016), with an Incoming post-doctoral Fellowships co-funded by the Marie Curie Actions of the European Commission, followed by a postdoctoral contract funded by the Belgian Foundation for Scientific Research (F.R.S- FNRS), at the Institute of Neuroscience (IoNS, Université Catholique de Louvain). Since April 2017, she has been a “Juan de la Cierva – Incorporation” researcher in the Neuropsychopharmacology Research Group (Psychology Department, Psychobiology Area). His professional career has been developed in the field of neuroscience, with studies on neurodegeneration, neuronal maintenance and neurodevelopment. He is currently working on research projects in mental health and neuropharmacology. 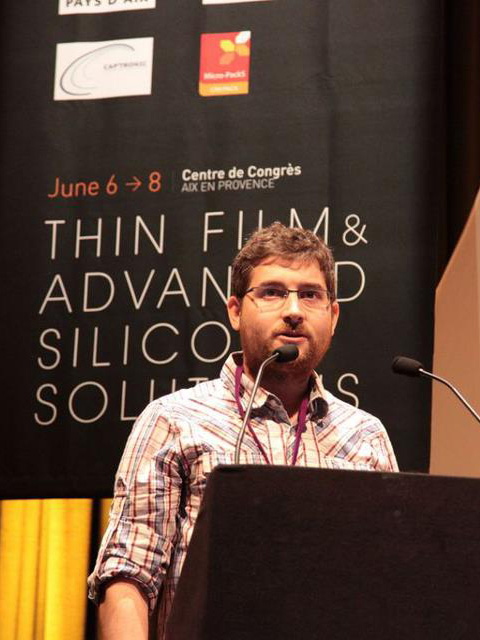 Brief curriculum review: Miguel began his research career in the research group Structure and Chemistry of Nanomaterials at the University of Cadiz in April 2006. In September of the same year, he obtained the FPI scholarship from the Ministry of Science and Education to begin his doctorate. His doctoral thesis entitled “Atomic-scale characterisation of Au Catalysts/Ce. Contribution of the Electronic Microscopy of Corrected Aberrations” was awarded with the extraordinary prize of doctorate of the University of Cadiz and with the prize of best doctoral thesis of the Spanish Microscopy Society in 2011. In December 2010, Miguel was awarded a CEA-Eurotalents Cofund Marie Curie Fellowship to begin his postdoctoral studies at the Atomic Energy Commissioner in Grenoble. In December 2011, he obtained the postdoctoral scholarship (MEC Fulbright) from the Ministry of Education and Science to continue his research work and in 2012 he joined the LEPMI laboratory of the INP-Grenoble Polytechnic School to work on the atomic scale study of new materials with applications in fuel cells. From September 2013 to December 2014, he worked under a postdoctoral contract with the FEI Company (Eindhoven), one of the world’s leading electron microscopy companies. In 2015, Miguel returned to the University of Cadiz with a postdoctoral contract associated with a European project and currently has a Juan de la Cierva Incorporation contract, focusing his activity on the development of new methodologies for the study of nanostructured materials with applications in environmental catalogues.

Brief curriculum review: Macarena graduated in Biology from the University of Seville (USE) in 2009 and 2010 and completed her Master’s Degree in Oceanography at the University of Cadiz (UCA). That same year, he was awarded a predoctoral FPU grant that allowed him to carry out his doctoral thesis on the dynamics of invasion of caprelid crustaceans in the Mediterranean Sea and adjacent waters. Within the framework of her thesis, she was able to carry out several stays in foreign centers, including the Federal University of Paraná (Brazil) and the Smithsonian Environmental Research Center (Baltimore, USA), obtaining her PhD degree in Biology from USE in 2015. After a postdoctoral project in Ceuta and a short stay at the University of Montpellier, he is currently a postdoctoral Juan de la Cierva Formación at the UCA.